The ability to identify an ONU and subsequently authenticate that the ONU belongs to a subscriber of one or more services has been traditionally performed as an function embedded within the physical OLT. In this regard the OLT acted as the policy enforcement point (PEP) and policy decision point (PDP). The ONU Authentication virtual function allows the BAA layer to act as a PDP entity where the BAA layer itself is able to perform the identification and authentication of an ONU based on a set of policy rules or the BAA layer can work in concert with the OLT and/or other SDN management entities to collectively identify and authenticate the ONU.

The management of an ONU device is the process that is responsible, once the ONU has been authenticated, to:

Strictly speaking ONU management and ONU authentication are different things. By the definition above, an ONU first needs to be authenticated (i.e. officially identified) before it can be managed. ONU authentication is the process that binds the ONU that gets connected to its device instance in the list of expected ONUs.

As mentioned above, ONU authentication is the process by which the xPON access network determines which ONU device (hence which subscriber at Service Management level) is speaking upstream, in order to:

Explicit ONU authentication is fundamental in an xPON access network because the xPON access network has no physical means to recognize which ONU is speaking when getting connected. This is different for a DSLAM/DPU with pt-pt DSL circuits where the local circuit at the DSLAM does identify the subscriber.

In all cases, ONU authentication is done by having the xPON access network compare credentials offered by the ONU at activation time with pre-configured credentials of the expected ONU devices.

A variety of credentials and procedures can be used to authenticate an ONU, for instance, matching Serial-Number, Registration-Id or Loid, running the OMCI Mutual Authentication protocol, or combinations thereof. Which ONU authentication procedure that need to be considered depends on operational procedures at the discretion of the operator; depending on the use-case this could even change in time for a given ONU, e.g. to ease truck-roll replacement of a failed ONU.

In this deployment, the TR-385 Separated NE mode is used for the ONUs. The ONU authentication relies on the PMA, which holds a list of schema-mounted expected ONUs and their authorized credentials, keyed by a device “name” string. The expected credentials are stored in the ONU meta-data appended to the ONU mount-points. 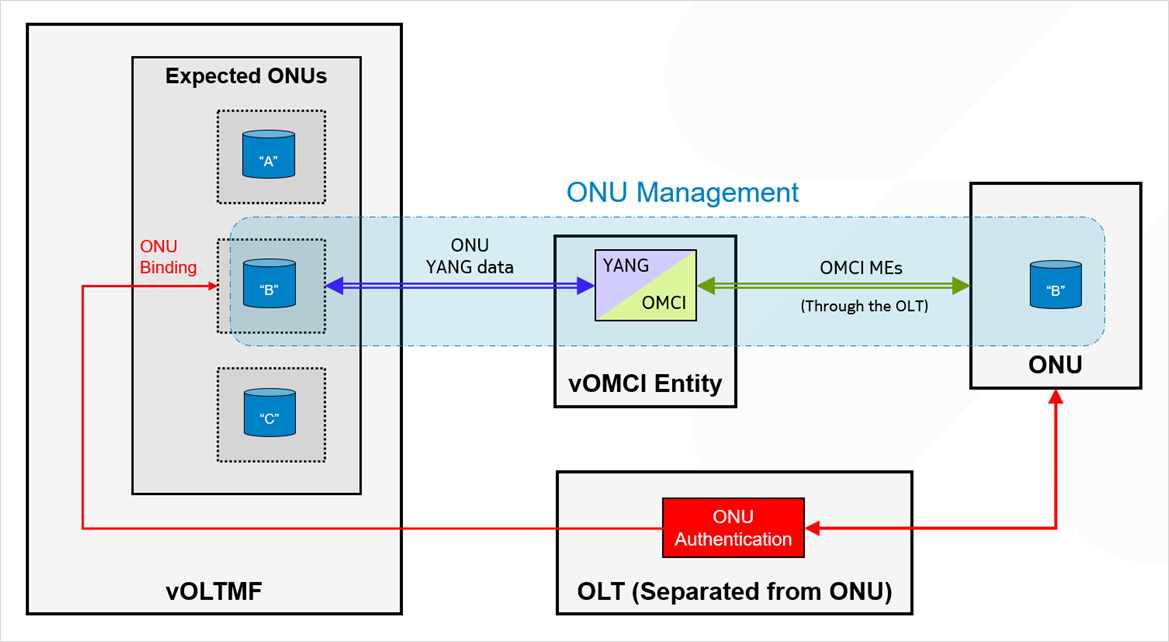 In this deployment, the TR-385 Separated NE mode is also used for these ONU(s). In this case, the OLT is able to perform simple ONU authentication based on expected-serial-number and/or expected-registration-id credentials stored in the vANIs 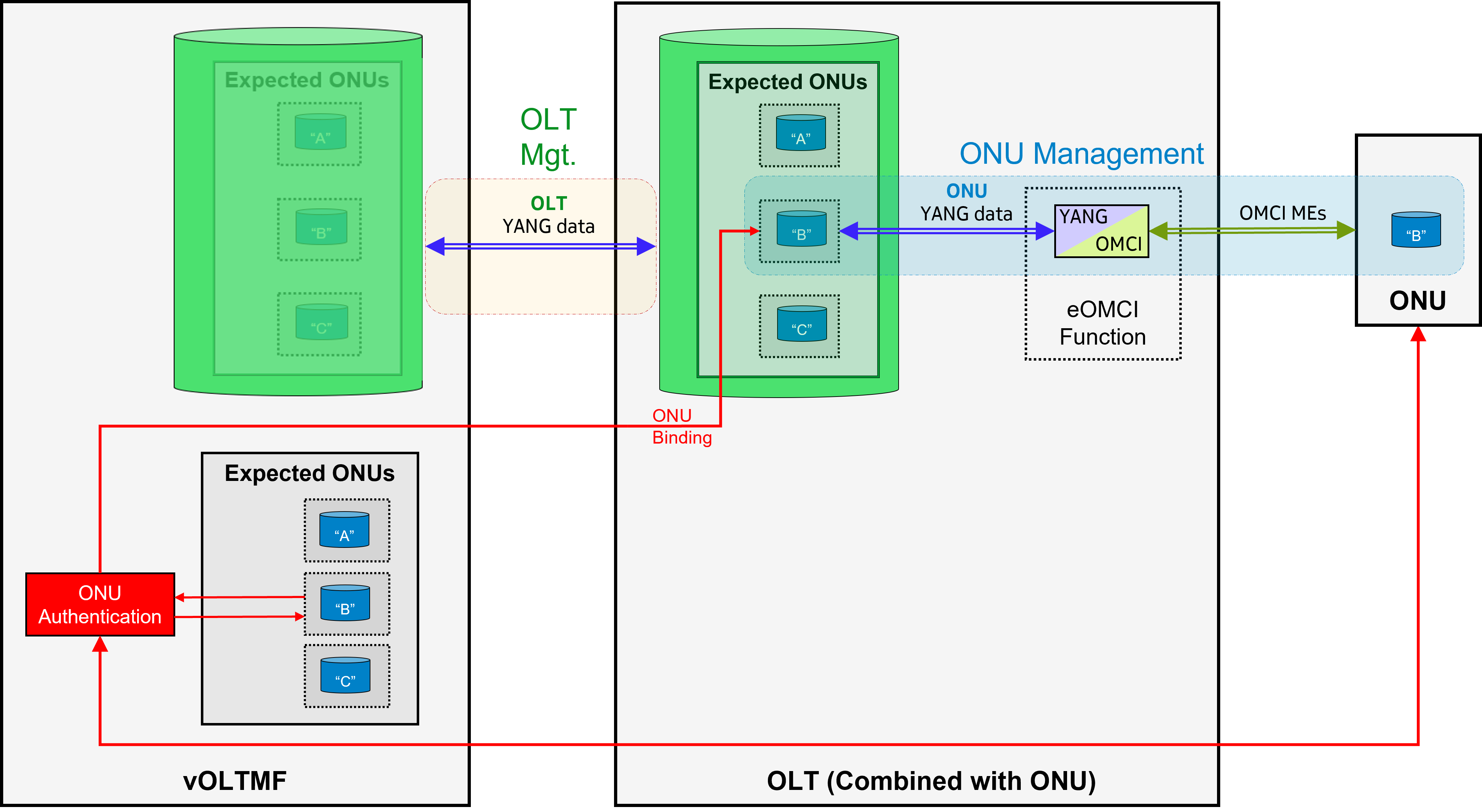 This deployment relies on the use for these ONUs of the TR-385 Separated NE mode in the vOLTMF and the TR-385-Combined mode in the OLT.

In this deployment, the TR-385 Combined NE mode is used in the OLT for these ONUs. Very similar to how the PMA deals with ONUs, the OLT contains, embedded in its YANG configuration, a list of schema-mounted expected ONUs keyed by a device “name” string. The credentials of the expected ONUs are stored in the vANI and/or the ONU meta-data appended to the ONU mount-points.

In SDN systems, xPON access networks in general and OLTs in particular allow a mix of ONUs on the same xPON such that:

The four deployments possibilities are summarized in the following table:

Authenticating and managing an ONU: Deciding which entity is in charge - General Principle

When an ONU shows-up on the OLT, it is the OLT - based on its YANG configuration from the BAA layer - that will first determine if it is expected and/or able to authenticate it by itself or not.

In a simplified way, the coarse decision tree in the OLT to support the four Use Cases above is illustrated as follows: 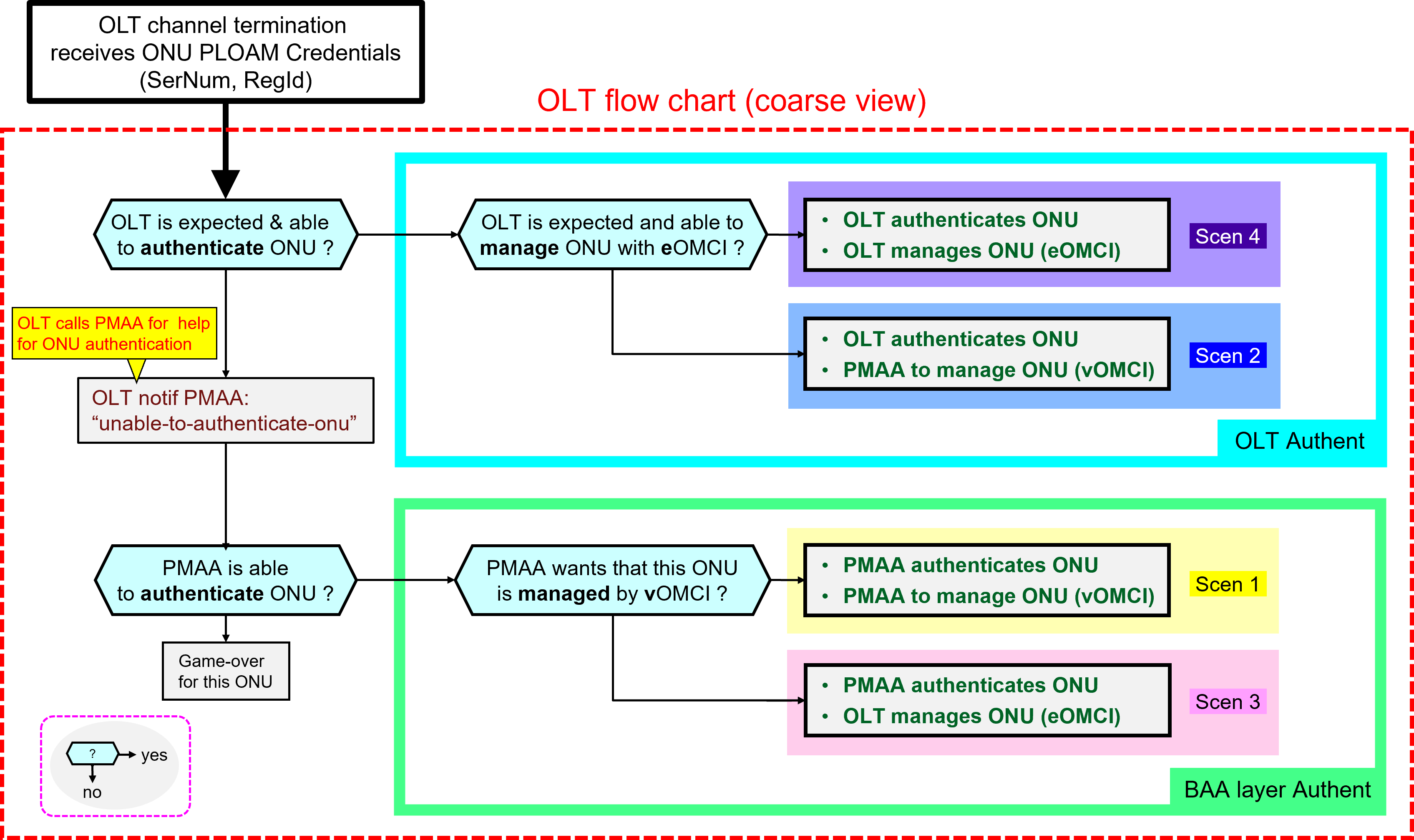 If the OLT is expected and able to authenticate the ONU, it will do so. The OLT will then further determine whether it is expected and able to manage it itself using eOMCI. Otherwise the OLT will rely on the BAA Layer's vOLTMF and the PMA for further initiative where for instance the vOLTMF could apply vOMCI to the ONU (nb: finer grained flow charts further below will reveal more alternatives).

If the OLT is not in a position to authenticate the ONU by itself, it will rely on the vOLTMF and PMA for authentication of the unknown ONU. The OLT will then wait for a confirmation from vOLTMF that the ONU is legitimate and can go into service. The OLT will also expect to be told by the vOLTMF that it is expected to manage the ONU with its local eOMCI or instead that the ONU will be managed by vOMCI.

The following pictures illustrate each branch of the decision tree process: 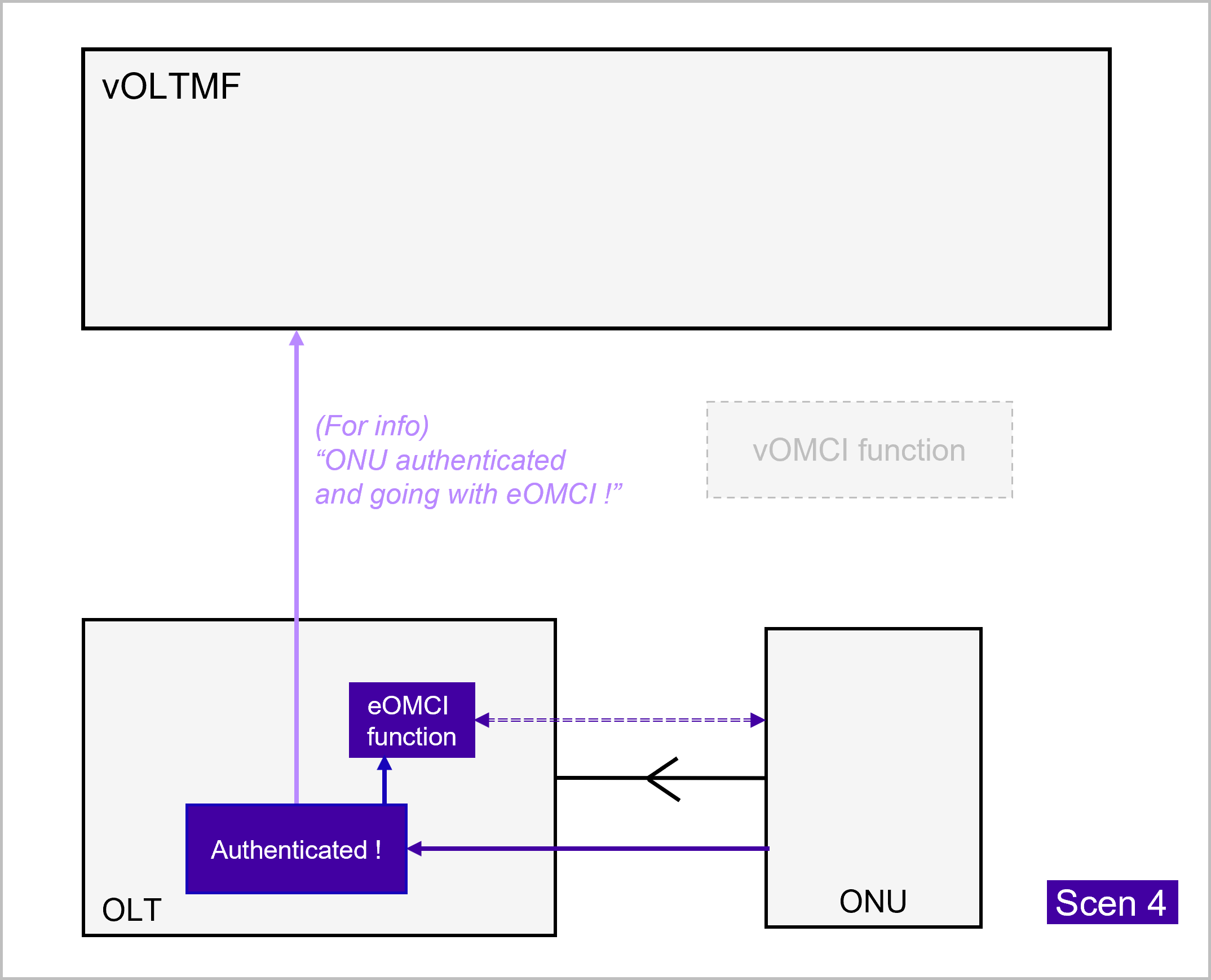 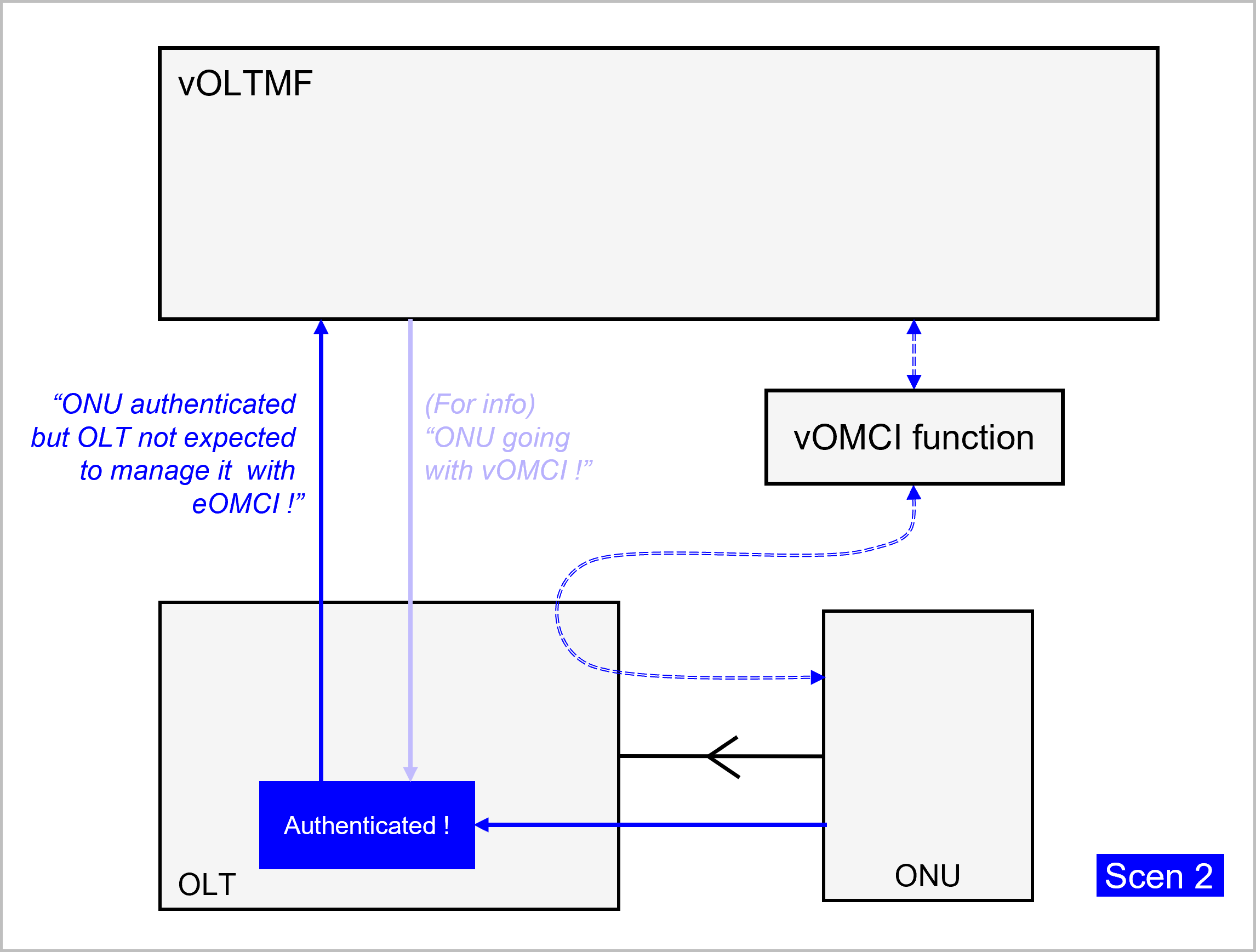 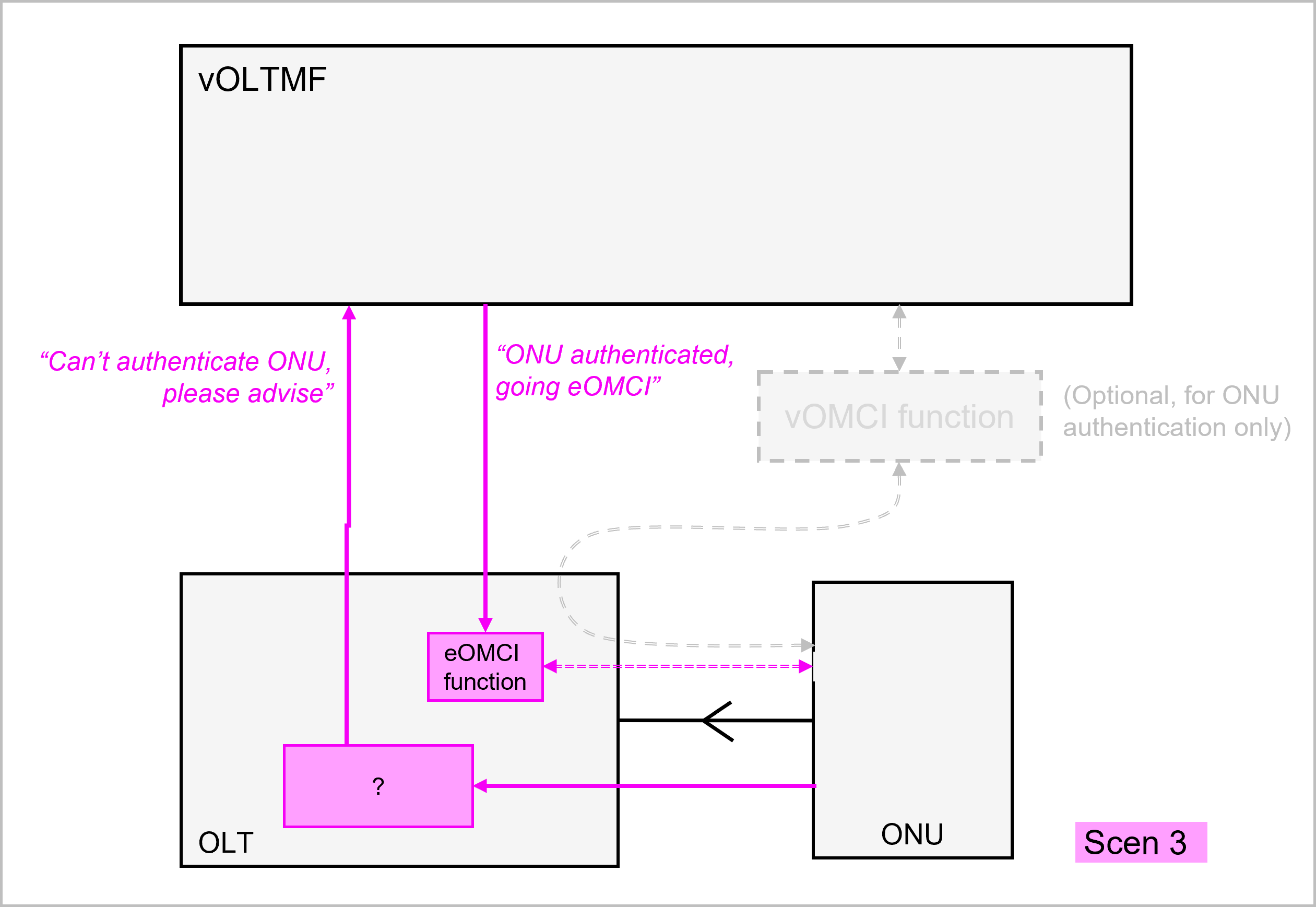 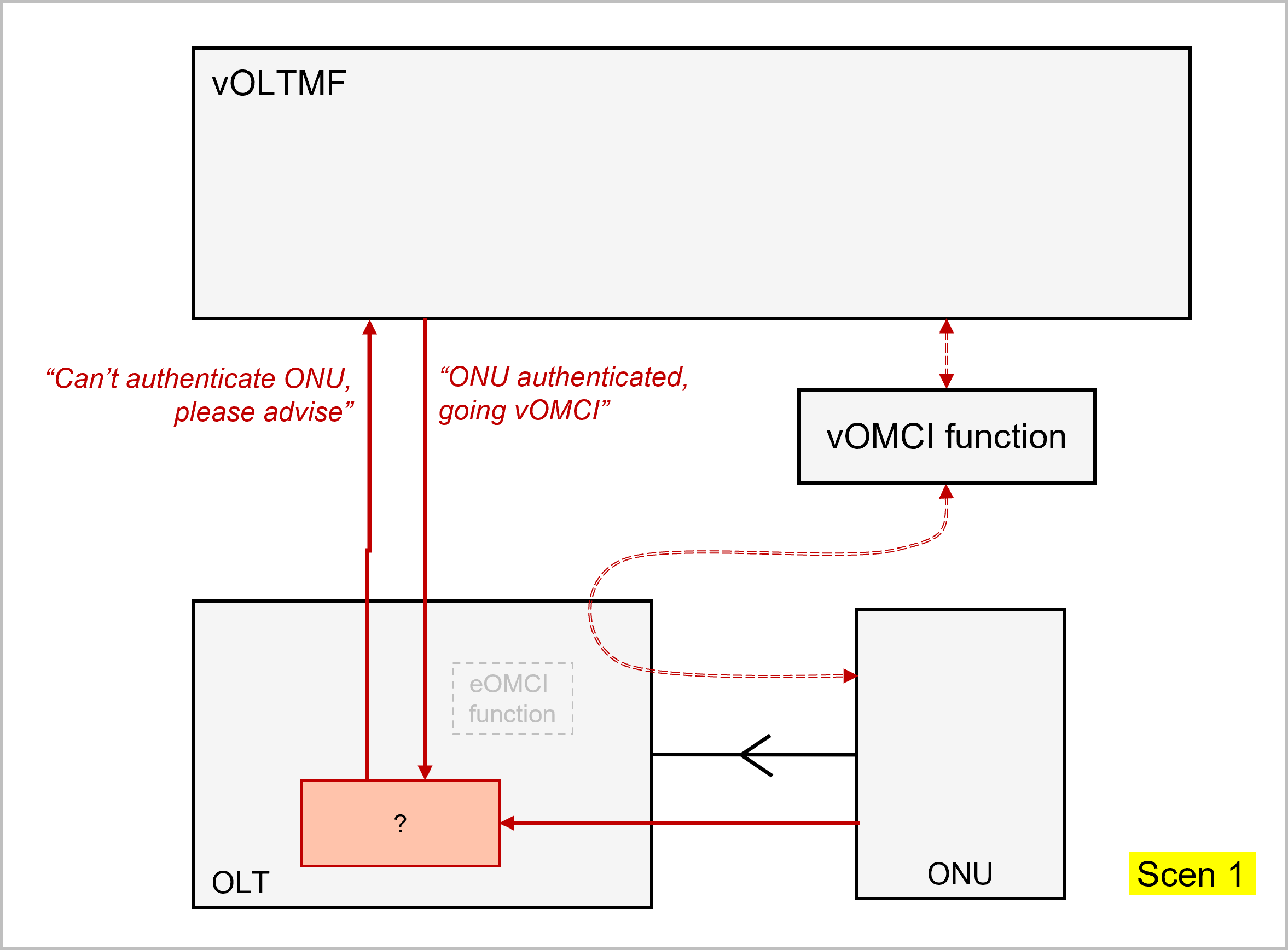 Mapping between notifications and sequences

The notifications above don't exist as standalone identities. They are derived from the TR-385 “onu-presence-state-change” which was extended with the determined-onu-management-mode leaf.